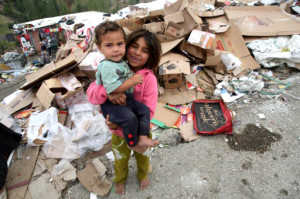 Syrian children refugees, who flock by dozens in Turkey each day, fleeing the civil war in their country, stand on October 4, 2013 at a makeshift camp in Ankara, where they arrived three months ago. In the central public Dikmen valley park in front of the eyes of local authorities, they build a shanty town. There are here some 250 refugees from Aleppo (northern syria) and among them 80 children. Saying that they live in very poor conditions, the Syrian refuges collect paper from garbage to try and make ends meet. Syrian President Bashar al-Assad today warned Turkey it will “pay dearly” for supporting rebels fighting to overthrow his regime, in an interview broadcast Friday on Turkish television. AFP PHOTO / ADEM ALTAN