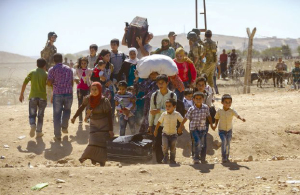 Syrian Kurds carry their belongings after crossing the border between Syria and Turkey near the southeastern town of Suruc in Sanliurfa province, on September 20, 2014. Several thousand Syrian Kurds began crossing into Turkey on Friday fleeing Islamic State fighters who advanced into their villages, prompting warnings of massacres from Kurdish leaders. Turkey on Friday reopened its border with Syria to Kurds fleeing Islamic State (IS) militants, saying a “worst-case scenario” could drive as many as 100,000 more refugees into the country. AFP PHOTO/BULENT KILIC