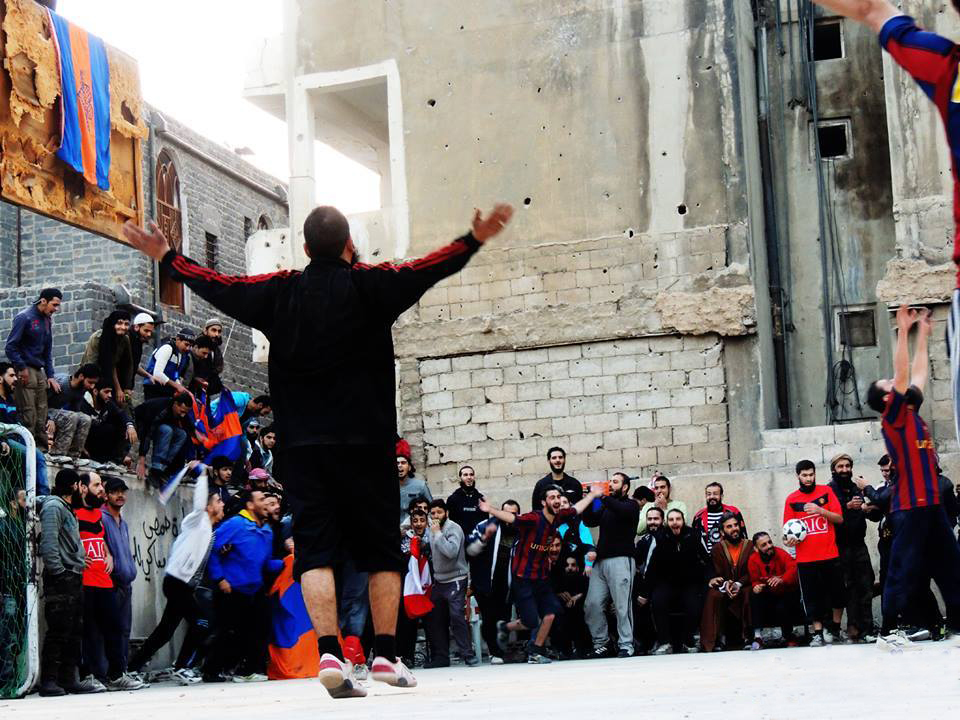 Homsi (related to Homs) famous songs “Ultras Blue Sun” are not returned today to Khalid Ibn Al Waleed Stadium, but to Homs’s besieged neighborhoods that have been under siege for a year and a half. A group of fighters organized a football championship in one of the schools at front line. This championship helped the people there to forget the siege where they lived.

They started thinking in the championship after many games that the fighters played in the same school; however, these games did not receive media coverage. Therefor, one of the organizers decided to start a championship that included all besieged neighborhoods. They advertised for it between the fighters, the media and the medical committee. “We do not expect a big number of audiences” Khatab, a member in United Media Office in Homs, said.

The number of participated teams were 16 which their names had different meanings. The medical team chose “Ganakr” as a name that refers to the cartoon character Junker, while the media team chose “Scorpions”. However, other teams chose names of international teams such as “The Old Woman” and “Gunners”. Nevertheless, there were teams which their names had a revolutionary meanings such as “Bayyada Martyrs”. Abdul-Basset Saruot, Syrian youth team’s goalkeeper, formed the team.

“The preparations were very simple” Khatab said. The organizers drew on the ground of the school to make it like a court and put the net for the goal. The players got sport shirts from one of the city’s shops, while each one of them had sports shoes which they often used in the raids and on the fronts. Moreover, the audience brought the desks from the classes of the school and set them up in the form of a stadium.

The audience, fighters and civilians including children, had their especial presence in the championship through the continuous cheering and the distinctive presence of the famous singers of the revolution: “Abo Abdo” and “Abo Samer”. That made us remember the “Ultras” encouraging which was used by the fans of Alkarama team. Besides, there were the usual songs, which were used in the demonstrations against Assad during the first days of the revolution in the city. However, the organizers used the groups division. The number of the audience was increased when teams were qualified to the final rounds. The prize for the team that won the championship was “two kisses on the cheeks” and “a Cup” that “belongs to the school administration”, Khatab said.

The participants said that, during the championship, over three weeks, they forgot the status of boredom, sadness and misunderstanding in which they live because of the length of the siege.

This championship was not the first one during the days of the siege; however, the fighters organized a Ping-Pong championship in the past. The participants expressed their willingness to participate in other championships. They are trying to coordinate cultural events at front line with the onset of winter.

A hundred and fifty families are under siege, yet they try to make their bitter reality funnier and resemble the days that they lived before the revolution. 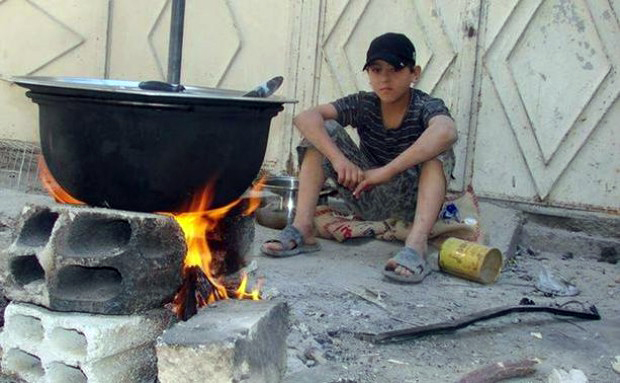 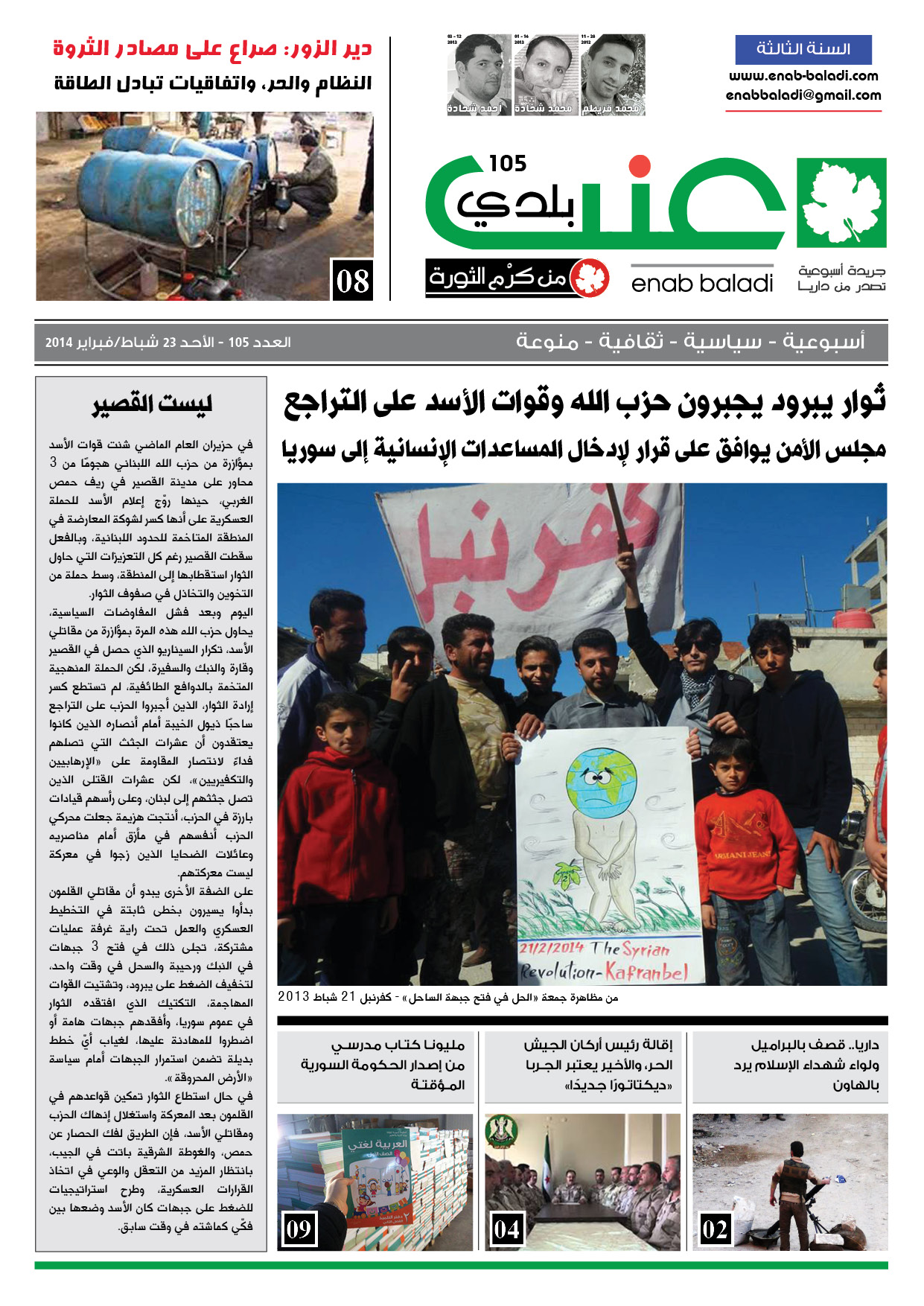 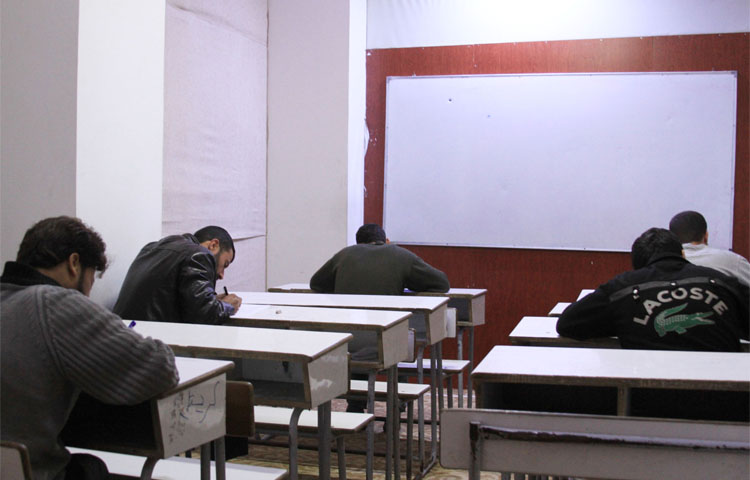 Literacy in Daraya, “Revolution” on Ignorance