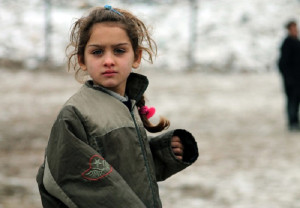 Snow covers the ground as a young Syrian girl plays in the snow in the northern Syrian city of Aleppo on December 13, 2013. Severe weather has delayed the start of the first United Nations airlift of aid items from Iraq to Syria for a second day, a spokesman said. AFP PHOTO/MOHAMMED AL-KHATIEB