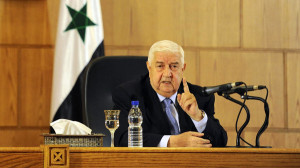 Syria’s Foreign Minister Walid al-Moualem speaks during a news conference in Damascus August 25, 2014. Syria said on Monday it would cooperate in any international efforts to fight Islamic State militants in the country, after Washington signaled it was considering extending the battle against the group into Syrian territory. Walid al-Moualem, whose government has been shunned by the West, presented his country as a vital partner in the war against Islamic State that has seized wide areas of Syria and Iraq. REUTERS/Omar Sanadiki (SYRIA – Tags: POLITICS CIVIL UNREST CONFLICT )