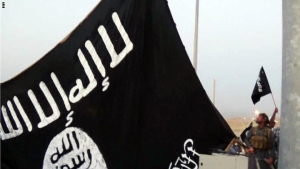 A twitter account widely believed to belong to ISIS posted this and other photos on Tuesday, June 24, 2014 showing their military parading victoriously through Mosul, Iraq. ISIS, or The Islamic State in Iraq and Syria, is a Sunni Muslim extremist group formerly linked to al-Qaeda. Mosul and many other Iraqi towns have fallen under their control as the Iraqi military has largely proved ineffectual at countering their invasion, refusing in many instances to put up a fight.