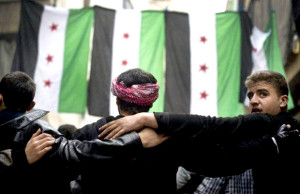 Rebel fighters take part in a demonstration against the Syrian regime after the Friday prayer in the al-Fardos neighbourhood of Aleppo on December 7, 2012. Syrian opposition groups had agreed in Doha last month to sink their differences and form a single body in the hope of getting direct aid, including crucial anti-aircraft weapons, to combat President Assad. AFP PHOTO / ODD ANDERSEN